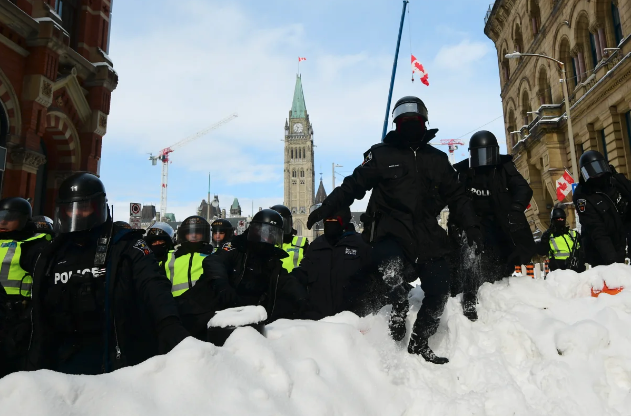 Police said in a tweet that the use of the “Anti Riot Weapon ENfield” (ARWEN) weapons were warranted to “stop the violent actions of the protesters.”

Police told the Canadian Press that they do not know of any reported injuries.

Police warned demonstrators in the evening that it is “unsafe to stay.”

“Get out of the cold and cease further unlawful activity. Anyone within the unlawful protest site may be arrested,” the force tweeted.

So far, police say they have arrested 47 people on Saturday. There have been 170 arrests total since Friday in the push to clear the blockade.

Since Friday, 46 vehicles have been removed from the secure zone downtown. In addition, 22 licence plates have been seized and 11 Commercial Vehicle Operator Registrations in Ontario have been suspended.

Police said earlier Saturday that “progress” has been made against the convoy blockade in the city that has lasted 23 days and they conducted a sweep from east to west Saturday morning to move demonstrators out of the parliamentary district.

However, they met a “barrage of resistance” in every step, Ottawa Police interim chief Steve Bell said.

He said that police are aware of protesters “leaving the parliamentary precinct moving to surrounding neighborhoods.”

“We are not going anywhere until you have your streets back,” Bell said.

Police confirmed the use of stun grenades and pepper spray, and smashed vehicle windows to arrest those inside since they began clearing the blockade on Friday.

On Saturday, convoy organizers said on Twitter they were “shocked at the abuses of power” by law enforcement in Ottawa and have asked truckers to “move from Parliament Hill to avoid further brutality.”

Before noon, police said they have arrested protesters wearing body armour and had smoke grenades and fireworks in their bags, as well as in a seized vehicle.

Police also said there was use of “a chemical irritant” following “assaultive behaviour” by demonstrators against officers who were telling them to leave.

On Saturday, convoy organizers said on Twitter they were “shocked at the abuses of power” by law enforcement in Ottawa and have asked truckers to “move from Parliament Hill to avoid further brutality.”

Before noon, police said they have arrested protesters wearing body armour and had smoke grenades and fireworks in their bags, as well as in a seized vehicle.

Police also said there was use of “a chemical irritant” following “assaultive behaviour” by demonstrators against officers who were telling them to leave.

When questioned about allegations that protesters may have been stepped on by horses on Friday, Bell said that “misinformation” is spreading concerning the incident and that some pictures have been “photoshopped.”

Police say there were no serious injuries to demonstrators as a result of sending in the mounted unit Friday to “lower the temperature” of protesters, according to Bell.

Bell said that two protesters collided with the horses “fell down” and “immediately got back up.”

As of 1:40 p.m. on Saturday, police had not sent mounted units into the crowd in a move similar to what was seen on Friday.

In statements posted on Twitter earlier on Saturday, Ottawa police said their officers on the ground are equipped with helmets and batons for their own safety due to the conduct of demonstrators.

“We told you to leave. We gave you time to leave. We were slow and methodical, yet you were assaultive and aggressive with officers and the horses,” police said.

In two additional tweets, police said a detonation of some kind of smoke device that was visible to crews on the ground was caused by demonstrators, not officers.

Police also confirmed that a loud noise heard on the ground came from officers, and that “it was used to resolve an unsafe situation.” They said they have not used tear gas on Friday or Saturday, and that demonstrators continue to launch gas cannisters at police.

Children remain in the crowd, despite repeated warnings from both police and the Children’s Aid Society of Ottawa to take them out of the area.

The organization issued another warning on Saturday as police advanced through Wellington Street and adjacent areas, telling anyone with children: “we urge you to leave immediately.”

Police added: “We are seeing young children being brought to the front of the police operation. This is dangerous and it is putting the children at risk. Children may be taken to a place of safety.”

As the convoy has disrupted local businesses, federal officials announced Saturday $20 million in funding will be made available to businesses forced to close by the convoy.

The government also said that 76 bank accounts worth $3.2 million have been frozen due to ties to the convoy under the powers of the Emergencies Act.

Ottawa police indicated those powers could be used against participants in the occupation.

Bell said that police will “actively look” to identify protesters once demonstrations have ended and will follow up with “financial sanctions and criminal charges” for those implicated.

“This investigation will go on for months to come,” he said.

Already the bank account of organizer Tamara Lich has been frozen. Lich, along with organizer Pat King, was scheduled to appear in court Saturday. While Lich had a hearing, a decision on her bail won’t come until Tuesday. King’s appearance was delayed until Tuesday, as well.

They will remain in jail until then.

Law enforcement including tactical teams from multiple jurisdictions as well as mounted units, armoured vehicles and riot police equipped with tear gas moved rapidly Saturday morning in a push that built on territorial gains from Friday during a slower, more cautious advance.

On Saturday morning, they pushed hard to move up Rideau Street onto Wellington Street, the road at the base of Parliament Hill which has seen perhaps the tightest encampment of big rigs and convoy-related infrastructure over the past three weeks.

Police could be seen moving down Sparks Street, which is one street south, parallel to Wellington Street, and down the surrounding intersecting streets in what appeared to be a bid to break up the more tightly packed areas held by demonstrators.

In an effort to limit the number of people coming into the core to join the demonstration, police said they have closed off one of the central bridges connecting Ottawa and Gatineau, Que., which is located directly across the river from Parliament Hill.

The Service de police de la Ville de Gatineau said in a tweet they had arrested one person for attempting to break through another police barrier set up at the nearby Portage Bridge.

The convoy blockade has been encamped since Jan. 28 and while many vehicles have left the city at the urging of police over the last 48 hours, a significant number remain.

Roughly 200 demonstrators continued to stay as of 12:40 p.m. around the area of Bank Street and Wellington Street. They stood on one side of a snow pile, facing off against mounted police as well as heavily armoured officers standing on the other side.

Some could be seen handing out miniature chocolate bars and passing around jugs of coffee, while others huddled in small circles saying prayers.

Roughly one block south on Sparks Street, heavily armoured cops were on the ground and were moving quickly to secure the area as they moved west towards Bank Street, which is one of the north-south arteries culminating at the base of Parliament Hill.

Members of Parliament gathered to meet inside the House of Commons on Saturday to debate the government’s invocation of the Emergencies Act — a move Bell said has been vital to police’s ability to respond, alongside the provincial and local emergency measures recently enacted.

The debate is scheduled to continue on Sunday and Monday, with a final vote set for 8 p.m. Monday. If approved, the act would have a time limit of 30 days from when it was first enacted, on Monday, Feb. 14.

But the act is receiving pushback.

Alberta Premier Jason Kenney on Saturday said that the province will be filing a court challenge to the “unjustified use” of the Emergencies Act.

Kenney said in a tweet that its use is “unnecessary,” “disproportionate” and “creates a dangerous precedent.”

Meanwhile, more protests appeared in other parts of Canada on Saturday, including one near Surrey, B.C., that has resulted in the closing of a border crossing.

Global News reporters trying to drive away from the site were surrounded by protesters on three sides of their car that was situated next to a ditch. One protester spat on the car’s window.