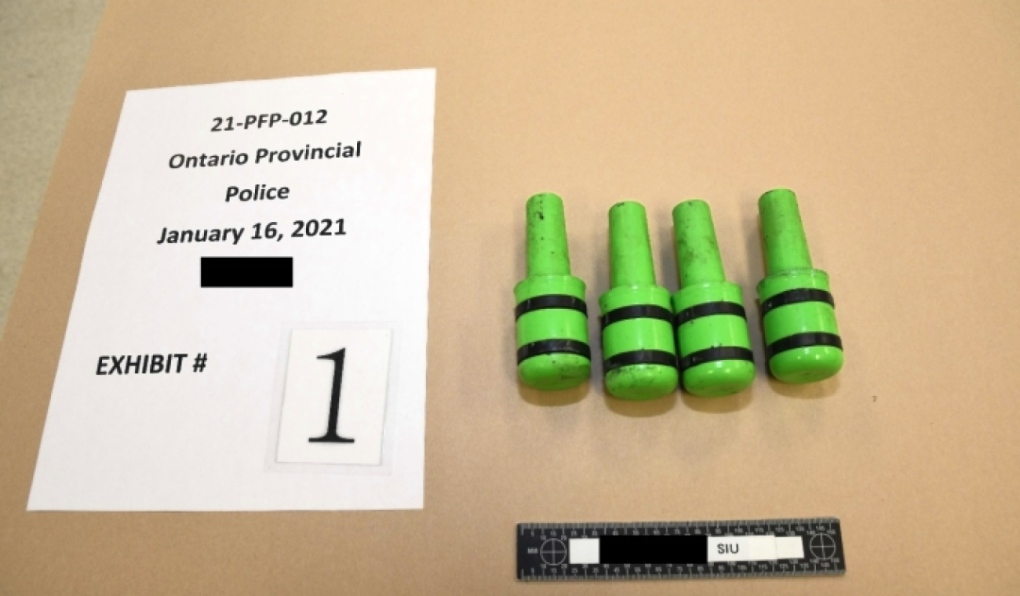 SUDBURY — Ontario Provincial Police in Sault Ste. Marie have been cleared in a January incident where a less-lethal weapon was fired at a violent suspect who came at them with a knife.

The weapon, known as the ARWEN, fires foam or wooden projectiles at suspects in an attempt to subdue them without causing serious harm.

Police were called Jan. 8 around 1 p.m., when a resident reported their neighbour was making threats.

“A 911 caller reported the complainant attending her family home and making threats to kill and burn their property,” according to evidence from the Special Investigation Unit’s report on the incident. “The complainant was armed with a knife.”

After fleeing the scene, and fleeing police attempts to stop him, the suspect later returned to his residence around 1:30 p.m., the SIU report said.

“By that time, the police were notified that the complainant was intoxicated, suicidal, and wanted to be shot by officers,” the report said. “Police had also ascertained that there were warrants out for the complainant’s arrest on a number of violent offences.”

After negotiations with police on his cellphone, the suspect said around 5 p.m. that he would surrender in 30 minutes, after he took a shower, tended to his dogs and plugged in his truck’s block heater.

He emerged at 5: 20 p.m., plugged in the block heater, cursed at police, and went back inside. He came out a few minutes later, “pulled out a knife and started walking towards the officers down the driveway, threatening them as he advanced.”

At that point, the officer fired the ARWEN twice, hitting the suspect, but he was “undeterred,” the report said.

“The Complainant turned and started to run back toward his backyard,” the SIU said. “A third ARWEN round was fired from about two to four metres. The complainant still had possession of the knife.”

Police chased him to the deck in the rear of the residence, pushing him into a sliding door, with the knife still in his hand.

At that point, he was handcuffed on the ground and taken into custody. He was taken to hospital to be checked out, then to jail.

In his decision, SIU director Joseph Martino said the use of force in this case was reasonable.

“By the time of the ARWEN discharges in question, the police were aware of the complainant’s threatening behaviour with a knife toward his neighbours,” Martino wrote. “They had also learned that the complainant was wanted on outstanding warrants for violent offences. He was clearly subject to arrest.”

Police had done everything they could to end the standoff peacefully, he said, even trying to contact the man’s psychiatrist.

“Regrettably, when the complainant exited his home and advanced on the officers with a knife in hand, he left them little choice but to respond with a measure of force,” Martino said.

“This was not the case of lethal force being brought to bear against a fleeing felon. Rather, it was an attempt to use less lethal force to disarm an individual of a dangerous weapon as he attempted to escape police apprehension. In my view, it fell within the latitude of legally permissible force in the circumstances.”