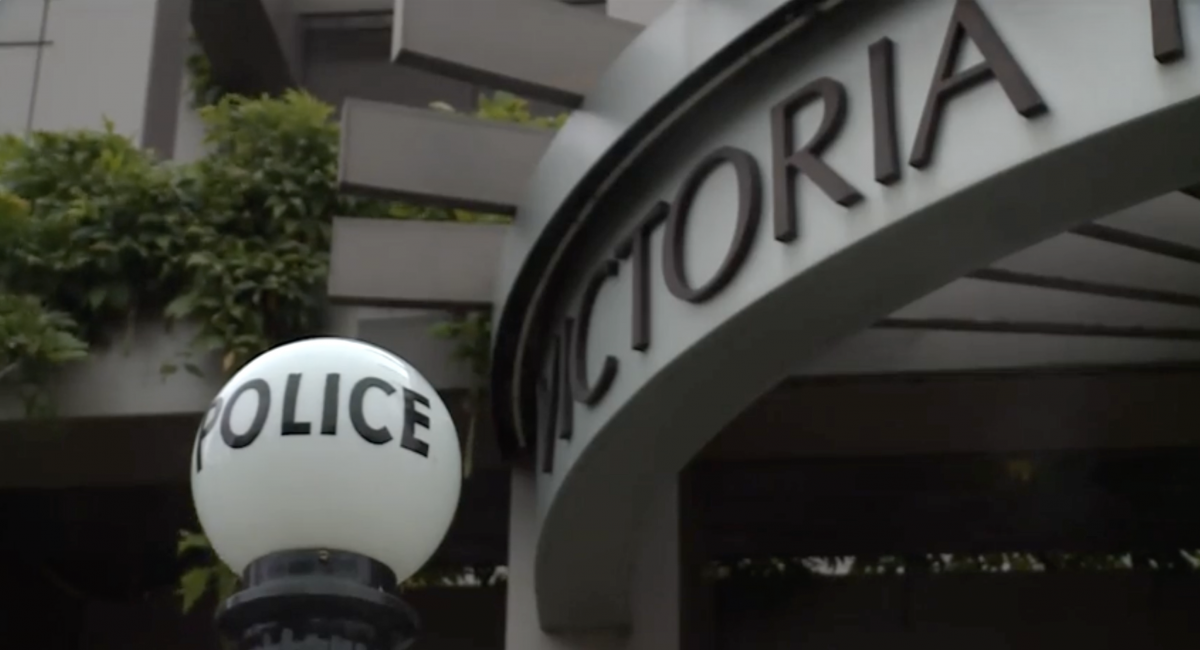 B.C.’s police watchdog has cleared Victoria police of any wrongdoing in connection with the death of a woman on Christmas Day last year.

Forty-three-year-old Lisa Rauch died after being hit in the head and neck by projectiles from a “less-lethal” weapon fired by a Victoria police officer.

Rauch’s family says she had struggled with addiction for 25 years but had a great sense of humour and had a daughter.

On Dec. 25, 2019, police were called to a report of a woman who was allegedly intoxicated and threatening residents at a supportive housing apartment building in downtown Victoria.

According to the report from the Independent Investigations Office of BC (IIO BC), a civilian-led police oversight agency, the woman barricaded herself in one of the building’s suites and “refused to give herself up to police.”

A fire broke out in the suite, according to the report, and Emergency Response Team members and firefighters entered the suite “in response to what was now an urgent and dangerous situation.”

The report states an officer deployed three projectiles from an Anti Riot Weapon ENfield (ARWEN), a “less-lethal” launcher, which struck the woman in the head and neck, knocking her unconscious.

According to the report, the woman was given medical aid and taken to the hospital. She was placed on a ventilator but did not regain consciousness. On Dec. 29, 2019, life support was removed and the woman passed away.

The woman’s name has not been released by IIO or police.

“We are struggling to understand how three shots fired into a dark room is considered accidental. One shot is an accident, the second and third shots are deliberate. The fact that visibility was so poor makes it reckless. We are not defending Lisa’s actions, but feel she was executed for those actions. The cop has no consequences for his actions.”

More information about the incident

The report says VicPD were called twice about the woman’s behaviour at the supportive social housing. The first call was made late in the evening on Dec. 24, 2019. Staff at the facility told police that the woman was in the building uninvited and “was acting violently and aggressively.”

“The [woman] was evidently intoxicated and was arrested only with considerable difficulty,” the report says.

The woman was taken to Victoria police cells. She was released at approximately 6:30 a.m. on Dec. 25, 2019, after she was sober, according to the report.

Then at 1:36 p.m. that same day, CCTV at the same building shows the woman entering the suite of a witness. The witness told police the woman was in the suite for some time, “drinking and consuming drugs.” The witness reported leaving the suite when the woman became ”’psychotic’, angry and aggressive.”

The report says when the witness tried to later reenter the suite, she found the door locked. The witness reported the woman opened the door with a knife in her hand and threatened to kill the witness. The witness then went to the building manager and asked them to call police.

According to the report, police were told the woman had a knife, had threatened residents and had locked the witness out of her suite. They were also told the woman was believed to be alone in the suite and had started smashing the witness’ possessions.

Three officers went to the hallway outside the suite. One of the officers told IIO investigators the woman could be heard screaming, yelling, and smashing things inside.

Officers began trying to evacuate residents on that floor, and tied a rope to the suite door, to alert them if the woman tried to exit.

“They encountered difficulties in persuading people to leave, as it was Christmas Day, and many of the residents were suffering from mental health or substance abuse issues,” reads a statement in the report

The Greater Victoria Emergency Response Team (ERT) was called out as police considered the situation was a criminal barricade.

At one point, a fire alarm went off inside the suite and continued for about 10 minutes. Victoria firefighters responded but staged nearby as they were told police were dealing with a barricade situation.

The report says after the fire alarm went off, an officer stationed outside the building saw the woman open a window and look out.

Dark-coloured smoke began to billow from the window, and water could be seen pouring down the side of the building from the suite’s sprinklers, according to the report.

An officer asked for authority to break into the suite to allow the woman to exit and firefighters go in to fight the fire.

The report says ERT members were authorized to breach the door and, if needed, to use a “slow and deliberate” advance into the suite to locate and remove the woman from the fire danger.

“This was due to [the woman’s] violent actions and because she was understood to have previously threatened an assault with a knife, the report says.

The main building fire alarm activated and firefighters responded. Police officers cut the rope securing the suite door and used a master key to unlock it. They opened the door wide, and an officer told IIO investigators “multiple verbal commands” for the woman to come out.

“The only response, he said, was nonsensical screaming and yelling by [the woman] from inside the suite,” the report says.

For approximately five minutes, officers remained at the door, trying to see into the suite using flashlights through the smoke (no lights were on in the suite).

Individual members went away to get gas masks. The report says the masks available to police are effective only against particulates, and not against toxic fumes. Police were unable to determine the location in the suite of either the woman or the fire.

Firefighters arrived on the floor and were told that they would need to enter behind police shields to deal with the fire, as the person they were rescuing was believed armed and dangerous.

The firefighters sprayed water into the room from the doorway, but the fire was not extinguished, and the resulting steam worsened visibility still further.

ERT members were slowly advancing into the room. An officer told investigators that the smoke was like “a wall” reflecting the police flashlights, but that he could see the glow of flames through it. That same officer said that the “apparent ineffectiveness of the firefighters’ water caused him to fear that an accelerant had been used, and he was concerned that [the woman] could be above the officers in a loft area, and could possibly drop more accelerant on them, putting their lives further at risk.”

He said he communicated his concerns to the officer who was carrying a less-lethal ARWEN weapon, designed for short-range control of a threatening individual, incapacitating the person by causing pain with a relatively low level of injury.

“It fires a large, rounded, hard plastic projectile, and is intended to be fired at the body of a person, preferably striking the large muscle areas of a leg or the abdomen,” the report says.

In his interview with IIO investigators, that witness officer with the concern described what happened next, which is quoted in the report.

“At some point, I picked up some movement straight ahead of us. I don’t know if the smoke cleared a little bit for a moment or if she actually moved but what I thought I was looking at was her standing on the other side of the couch in an open centre of the room. She was standing there with her arms at her sides facing us. I said ‘contact’ which is our short concise way of communicating that I see her and that she’s there so that everybody around me knows what I’ve seen.

[Subject officer] immediately fires one baton round and I think in my mind that he’s targeting her hips or maybe even her stomach because that’s what I can see. What’s sort of black to me is her lower limbs because I think that’s the back of the couch, so I’m sort of seeing this kind of whiteish shape which I think is the front of her body.”

The officer with the ARWEN fired three rounds, and after the third, the woman reacted. She slumped forward, and the witness officer realized that what he thought was her abdomen had been the back of her head, according to the report.

She had been sitting, facing away from the officers, on a couch.

ERT members immediately moved forward and took the woman, who was then unconscious from the room as firefighters went in to suppress the flames.

The witness officer said the woman was wearing black clothing and had light-coloured hair.

“What he had thought was a light-coloured top above dark lower clothing had in fact been the back of her head as she sat facing away,” the report says.

An autoposy revealed the woman’s cause of death to be blunt force head injuries, consistent with being caused by ARWEN rounds.

The toxicology report prepared with respect to the woman found a blood alcohol concentration consistent with “heavy level of intoxication with alcohol”; methamphetamine “within a range associated with recreational use”; cocaine/benzoylecgonine within a range “associated with recreational use”; a combined level of venlafaxine and desmethylvenlaflaxine “within a range which is consistent with therapeutic doses”; and trazodone in a concentration “below a typical therapeutic range”.

In the report the chief civilian director, Ronald MacDonald wrote that officers were responding to a very serious and dangerous situation.

“A barricaded individual had started a fire in a multi-unit residential building, and there was resistance among some of the residents to being evacuated,” he said.

“It would not be realistic to expect the police to send firefighters into the suite unprotected to deal with the fire, given that [the woman] was known to be armed with a knife, had been acting irrationally and aggressively, and had previously uttered death threats.

MacDonald also said it was reasonable for ERT members entering the suite to be very cautious about the danger the woman might pose, but at the same time, there was great urgency in the need to extract her from the burning room as quickly as possible.

“This was not a case where there was time for further negotiation or attempts at de-escalation. The police had to act right away,” he said, adding that the lives of many people were at risk.

“In those circumstances, deployment of usually non-lethal ARWEN rounds to disable [the woman] and overcome potential resistance was proportional and reasonable.”

MacDonald said the officer who fired the ARWEN launcher would have had a similar perspective and visual obstructions as the witness officer who gave an account of what he saw in the suite, as it appears from the evidence they were in close proximity as they were trying to find the woman.

He also said there is no reason to conclude the officer with the ARWEN deliberately fired at the woman’s head.

“That he did so, on the evidence, was a tragic accident,” MacDonald said.

“There is no indication of recklessness or negligence in the overall conduct of the involved officers in this incident. They were doing all they reasonably could to save an emotionally disturbed and intoxicated person from herself—and the other residents of the building from her actions—and needed to act swiftly with a relatively high level of force to try to resolve a very dangerous situation as quickly as possible. That use of force, in the circumstances, was necessary and reasonably proportional. The outcome was unintended.”

MacDonald said that he does not consider there are reasonable grounds to believe that an “officer may have committed an offence under any enactment” and so is not referring the incident to Crown counsel for consideration of charges.

The purpose of any IIO investigation is to determine whether there are reasonable grounds to believe that an officer, through an action or inaction, may have committed any offence in relation to an incident resulting in serious harm or death.

You can read the full report here.