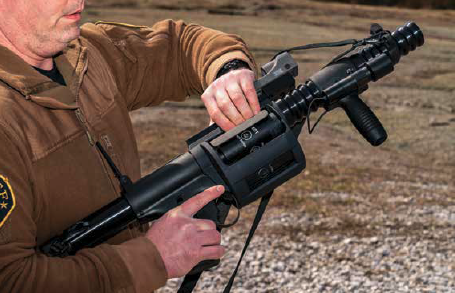 Written by Michael A. Moore – Photography by Jim Robertson

A law enforcement officer uses many tools in his or her work. Those tools range from handcuffs and oleoresin capsicum (OC) spray to a variety of tactical weapons, both lethal and less-than-lethal.

“The ARWEN affords more options because there are a host of munitions you can shoot with it,” Wallace said. “You can shoot CS (tear) gas with it, and rubber or wooden batons. It gives you more capability.”

According to Greer, assistant team commander with the KSP Special Response Team, that agency began using the ARWEN when it first came out in 1980.  “All KSP SRT members are trained on how and when to use the ARWEN-37, but only four members are designated as ARWEN-37 specialists and are assigned the weapon as part of their standard loadout,” Greer said.

In all, the ARWEN-37 uses AR-1 impact baton rounds, AR-5 barricade penetrating rounds, and OC and CS chemical munitions, Greer said. “They can also be used to knock out windows or street lights to gain a tactical advantage on a call out,” Greer added.

The ARWEN isn’t a tool that sits around, gathering dust. Greer said KSP SRT uses it routinely. “(We) use this weapon, in some form or fashion, on almost every single call out,” Greer explained.  “Whether it’s launching impact baton rounds at a non-compliant suspect, or launching chemical munition barricade penetrator rounds into a residence on a barricaded subject, the ARWEN-37 is relied on heavily by KSP SRT as its primary less-lethal weapon. We also use Tasers, but the ARWEN-37 is still our primary less-lethal option.”

The most significant benefit to the ARWEN-37 is the fact it cannot be confused with any other weapon, Wallace said. “We want to make sure it cannot be interchanged because, under stress, that can be an issue,” Wallace explained. “Because it’s a 37mm, there is no way to confuse it with a 40mm munition. You cannot confuse a lethal round with a less-lethal round. Having this type of weapon system removes that risk.”

Additionally, the sound the weapon makes is much different from that of a sidearm, shotgun, or rifle, Wallace continued.

“If somebody uses a shotgun for a bean bag, and you have a guy with a knife, and you want him to drop it, if a shotgun is used, it sounds like a shotgun,” Wallace said. “Then other people are going to respond with what is called sympathetic gunfire, where they think (the person using the shotgun) sees something they don’t, so they start shooting. With this weapon, it is easily recognized that it is not a shotgun, rifle or handgun. It makes a thumping noise. It doesn’t sound like a regular gun.”

The ARWEN-37 also allows for optics, which aids SRT greatly, Greer said.  “The biggest pro to the ARWEN-37 is that it is a rifled barrel that is capable of mounting a red-dot optic,” Greer said. “This allows it to be extremely accurate as a less-lethal launcher, especially when compared to smoothbore launchers or launchers with only standard iron or plastic leaf sights.” Another benefit is the impact on the target. “First, it is best to classify the ARWEN-37 as a ‘less-lethal’ weapon because it still has the lethal. 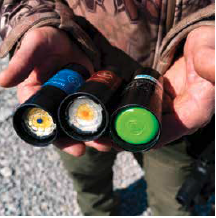