THE USE OF PLASTIC BALLS: A PEACEFUL METHOD? 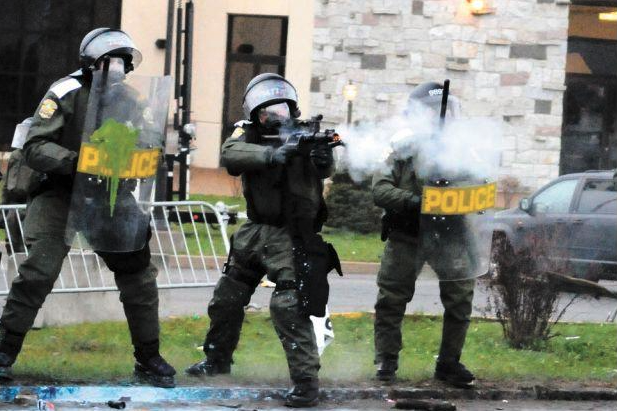 “Agent Burelle ” failed in his obligations by not respecting the rules of engagement that he had to follow, ” recalls the Police Ethics Committee in its decision rendered Tuesday”.

The police ethics committee ruled on January 24: 35 days suspension for agent Denis Burelle, number 10477, blamed in May 2012 for having seriously injured three student demonstrators in Victoriaville. An unfavorable decision for the accused who, during the events, had not used his intermediate weapon with prudence and discernment.

The story goes back to Friday May 4, 2012, during the general council of the Liberal Party of Quebec when the number 10477 in question was one of the six agents in the five platoons deployed by the Sureté du Quebec to hold an impact weapon Arwen 37. During the intervention, he fired on the demonstrators ten times in half an hour, completely ignoring the damage of his projectiles. Among the three injured, there was Alexandre Allard who had been hit by a projectile in the head causing a fractured skull and a double concussion. He has had permanent sequelae from his injuries. The second, Dominique Laliberté-Martineau, suffered a double jaw fracture in addition to having six broken teeth and a lacerated lip. The third demonstrator, Magali Paquin

An Arwen 37 is an impact weapon used mainly during crowd control. It has kinetic stick type projectiles at more than 266 km / h, the speed just below that considered deadly. Its use is very restricted and strict. According to the report of the ethics committee following the event, the user of the weapon must respect the following regulations :

1. Before using the impact weapon, the police officer must assess the advisability of using it. He must look at the environment, to know if there are people around, if he sees the target, if the target is clear, remembering that it is the thigh which must be aimed .

2. As for the target person’s impact zones, the user must target the green zone, either the leg, thigh or forearm. The yellow area, either the knee or a joint, is more at risk. Depending on the size of the person, the area may be green or yellow. Pulling in the red area, either the head or the cervical spine, can cause serious injury or death .

3. To have precision on the shot, the user must respect the following fundamental techniques: the position of the body, which must be stable at the time of the shot, the taking of the weapon, looking for the target, the pressure on the trigger and the breathing.

Officer Larochelle added to the report that the user of the weapon, if he has just fired, must ensure that his shot has been effective. A reassessment is made, to find out if it is safe for him or if another threat has appeared. If there is no more threat, he disengages. Each shot must be reported to their platoon leader

as soon as possible. What agent Burelle would not have done since he does not know where nine of his ten bullets landed.

Police principles to be observed

The police must: use the minimum force necessary to resolve the conflict, because it involves citizens.

The controversy surrounding this impact weapon stems from the fact that it is extremely dangerous and that the victims are often innocent (not the people initially targeted). In this situation, the policeman got carried away by the eventsby acting against the rules he had to follow during the demonstration. His carelessness could easily have led to three deaths, it was only a matter of a few centimeters. In this case, even if the demonstration had gone wrong, the three victims were considered “in no way threatening”. As a patrol officer, it was Burelle’s responsibility to control the crowd while ensuring peace and order, as well as protecting property. But what about citizen protection? Is this really the goal when we fire nine out of ten projectiles blindly, as reported in the report of Investigation “Breakneck”. Agent Burelle seems rather to have sought to “punish” the “criminals”. It is easy to conclude from this that Burelle did not fulfill any of the police’s mandates.

The SQ recently renounced the use of plastic bullets following several reports of injury following their use. The case of May 4, 2012 is a very good example. The police will now be equipped with a new impact weapon which uses projectiles which deform during contact. Unfortunately, these bullets called “BIP” are considered just as dangerous according to a research report released earlier this year. Produced by the École nationale de police and disclosed by the Quebec Department of Public Security, the report mentions that “despite its security reputation, the attack by this projectile on vulnerable bodily areas such as the head, neck or thorax, could cause serious injury or death ”.

Unless another event requires the presence of impact weapons, SQ police will be equipped with BIP projectiles for the first time at the G7 summit in La Malbaie, in Charlevoix, in June.

PrevPreviousMan sets himself on fire at McDonald’s in east
Vancouver, investigation launched
NextEdmonton man killed in
confrontation with policeNext