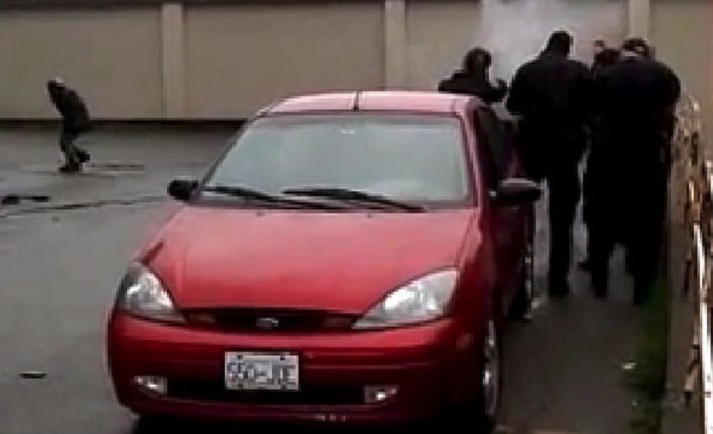 Activists outraged, but police say they were responding to call of man waving butcher knife

Roy Roberts is shot a second time as he refuses to comply with police commands to get down on the ground. Abbotsford police were responding to a call of a man yelling and waving a butcher knife. (YouYube/Mike Archer)

Activists in Abbotsford, B.C., are outraged by what they say was unnecessary force that police used in the takedown of a mentally ill homeless man in that city last week.

Police say they were responding to a call of a man yelling and waving a butcher knife who refused to comply with police commands to get down on the ground.

“Given the situation we had, and that’s what police do, deal with the situations they are dealt, I believe we handled it in a professional manner,” said MacDonald.

The man has since been identified as Roy Roberts, a homeless man with mental health issues. After a YouTube video of the incident surfaced, activists launched an online petition accusing the police of using unnecessary force.

In the video, police can be seen addressing Roberts, whose first name is Roy, as John, shouting , “Stay down on the ground John. Do not get up. You’re under arrest.”

Roberts is heard to ask, “What for?” A police officers responds, “because of a weapon….[unintelligible]…a knife.”

Roberts refuses to comply with police commands and is shot once by the Arwen gun. A minute later, following more police demands, he is shot again.

Roy Roberts staggers after being shot with a police Arwen gun that fires bean bag rounds and rubber bullets. Roberts refused to comply with police commands to get down on the ground. (CBC)

The homeless man never does comply with police instructions to get down on the ground and officers eventually move in and arrest him. Roberts has since been charged with possession of a dangerous weapon.

Police officers are trained that a person with a knife can close the distance on an officer from as far as six metres away and inflict fatal wounds even while that person is being shot.

However, Mike Archer with the online publication Abbotsford Today says Roberts is well known to police, having had more than 200 interactions with him in the last decade. He criticizes police for not taking more time to negotiate and de-escalate the situation.

The homeless man had also been occupying a camp close to Abbotsford Community Services for several months. Activists are also upset that Roberts’ camp was removed shortly after he was taken into custody.

The City of Abbotsford has had a number of run-ins with the homeless who have set up several camps in the city. At one point, manure was spread on a camp at Abbotsford Jubilee Park to get the homeless to leave. The city recently set up a task force on homelessness to develop solutions to the problem. On mobile? Click here to watch the YouTube video CBC’s Journalistic Standards and Practices|About CBC News