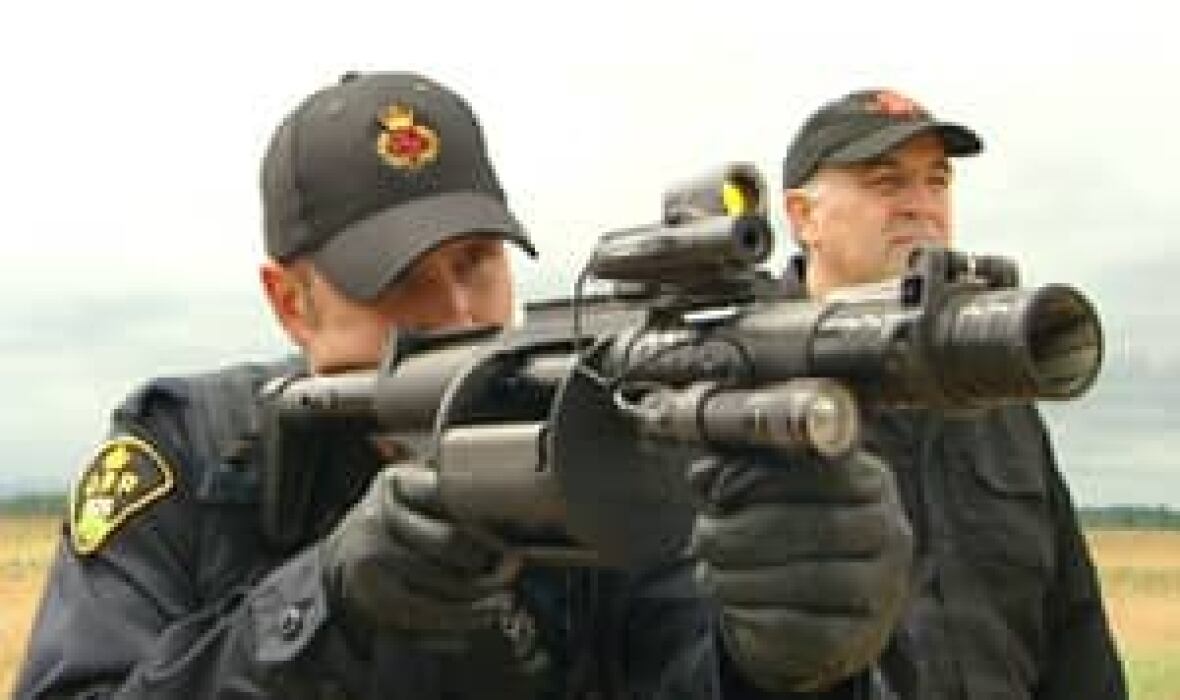 Police tactical teams have been practising with plastic bullets and tear gas at a Canadian military base near Toronto in case protesters at the G8 and G20 summits turn violent.

The weapon, the ARWEN 37, is promoted as “less lethal.” The gun is designed to fire tear-gas canisters and large, 37-millimetre plastic bullets — also referred to as rubber bullets — from distances of up to 100 metres. ARWEN is short for Anti Riot Weapon Enfield.

“The ARWEN is used in situations where the police are dealing with individuals who are combative, assaultive and are proposing serious danger to themselves or others,” Ontario Provincial Police Const. Mel Tourigny told CBC News during a training exercise at CFB Borden in Ontario.

Tourigny refused to divulge where or how the weapon might be deployed during the summits of world leaders this week.

But she confirmed the weapon is one “use of force option” that could be deployed, in addition to stun guns, batons and tear gas, to help officers keep a distance as they try to disarm violent protesters.

“It’s realistic to accept that there very possibly could be an injury to a person being struck by this projectile, but it’s a less serious injury because it’s deemed a non-lethal [weapon],” Tourigny said.

Police Ordnance, the Canadian company that manufactures the ARWEN, bought the rights and has become the sole maker of the weapon, supplying police and military around the world.

“It’s less lethal by the fact that this is not going to penetrate the body,” said James Cassells, a retired Toronto Police Service tactical squad trainer who now works for Police Ordnance.

Officers confirm they will have dozens of anti-riot weapons — a kind originally developed at the request of the British military for crowd control in Northern Ireland.

“It was originally developed in the UK for crowd control involving the disturbances they were having in Ireland,” Cassells said. “They needed something that was going to be less lethal.”

But the British military never really deployed the ARWEN for its intended purpose because they feared the weapon looked too menacing, Cassells said.

Cynthia Bir, a professor at Wayne State University in Michigan who specializes in biomedical engineering, said the biggest risk for those using the weapon but not properly trained on it is “shot placement.”

“Obviously, the head is a very vulnerable region,” said Bir, who has conducted independent tests on the ARWEN and its impact. “In no way shape or form should we be aiming at the head.”

Bir said she and her team found the ARWEN’s round of bullets to have a fairly low risk of injury.

But she noted there have been serious injuries and even deaths around the world in instances where police have shot people in the head.

In 1994, Ryan Berntt of Vancouver was shot in the head by a police rubber bullet fired from an ARWEN during a Stanley Cup hockey riot. He suffered serious head injuries and later sued police, claiming brain damage. He lost his claim.